Blog Ripe for the island

Which neuropsychological tests would you take with you to an island?

You and international colleagues will be taken to a remote island and told to take the most useful neuropsychological tests. Which tests do you think will be chosen?

Ripe for the island: Which neuropsychological tests would you take with you to an island?

Imagine you are to be taken to a remote island, but you are only allowed to take a limited number of things with you. Despite the lack of space, the island obviously places great emphasis on high-quality health care. Indeed, you are to take with you what you consider to be the most useful neuropsychological tests - and your international colleagues have been invited to do the same. Would you tend to suspect that everyone would select a similar test inventory, or would there be strong regional differences in selection?

What is certain is that neuropsychological tests are commonly used around the world. Many neurological diseases and psychiatric disorders lead to cognitive impairments, which can occur in different forms and degrees of severity. This poses a particular challenge to differentiated diagnostics. Therefore, since the beginning of neuropsychology, many different test paradigms have been developed to help objectively assess cognitive impairment.  Even in times of imaging techniques such as MRI or PET, neuropsychological tests still play a major role in diagnostics and are an essential tool in the practice of many neuropsychologists worldwide.

Which neuropsychological tests are most commonly used?

In recent years, several standardized surveys of neuropsychological practice have been conducted worldwide1-6 , asking questions about (neuro)psychological training, current work situation, most commonly studied disorders, and therapeutic methods used. A central question, however, was of course also which neuropsychological tests are most frequently used. The respondents could choose from a list of 60 regionally used tests. From these, rankings were compiled per country/region.

Table 1 summarizes the country-specific rankings of surveys from Latin America1, France2, Spain3, USA4, South Africa5 and Italy6 and ranks them according to which tests or test paradigms are most frequently used in several countries. 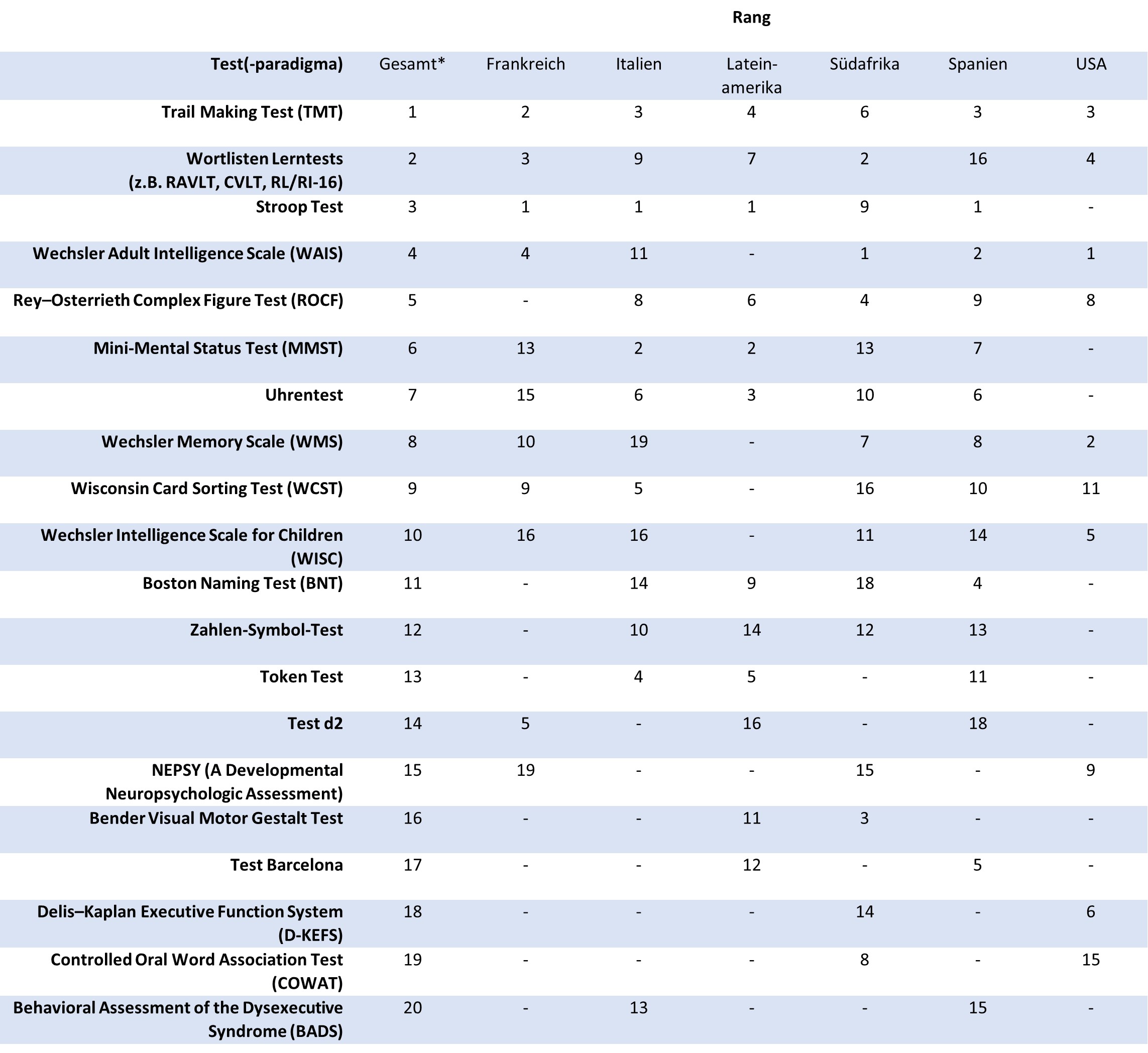 * For the ranking "Gesamt" we considered 1) in how many countries the test/test paradigm was mentioned in the top 20 and 2) which mean rank was reached across all countries.

When comparing these countries, it is immediately noticeable that the same tests or test paradigms appear repeatedly in each country-specific test list. This indicates that the test paradigms themselves work well in different cultures. Moreover, the relatively homogeneous test selection is particularly noteworthy given the diversity of cognitive dimensions and existing test paradigms. Thus, on our imaginary island, you would most likely find a small but proven selection of tests and test paradigms, and thus notice that neuropsychologists worldwide work with a similar toolbox.