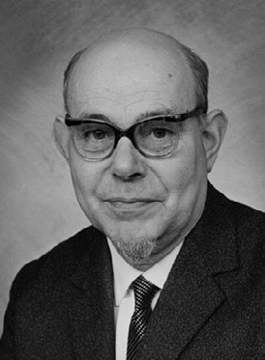 Short biography:
John Carlyle Raven was born in London on 28 June 1902.
His main interests were in topics that many would today regard as peripheral, such as the psychology of religion, particularly its spiritual/parapsychological components. Nevertheless, his detailed notes on his undergraduate laboratory work are remarkable.
As an undergraduate, he became friendly with Charles Spearman and shortly after graduation, this relationship led to an introduction to Lionel Penrose who needed an assistant. Around this time, he met his wife (Mary Elizabeth Wild) who became a crucial assistant throughout his life.
Penrose was a geneticist conducting an investigation of the genetic and environmental origins of mental deficiency. This involved administering the Stanfort-Binet Intelligence Scales tests to all parents and siblings of children identified as mentally deficient by the school system in East Anglia.

Raven found the tests cumbersome to administer in homes, schools, and workplaces (where, as he commented, there were friends and parents anxious to assist, no separate facilities for testing, and often a great deal of noise) and the results impossible to interpret because so many different things were composited together.
Accordingly, he set about developing tests of the two components of g identified by Spearman – namely eductive (meaning making) and reproductive ability. The former was measured by the Raven's Progressive Matrices (RPM) tests and the latter by a vocabulary test which later became known as the Mill Hill Vocabulary Test (MHV). The development of the RPM is described in his Master’s dissertation. Significantly, this does not mainly consist of the kind of literature review one would normally expect but a specification of the operational criteria to be met by the, as yet non-existent, test. He and his wife, with the support of a grant from the Darwin Trust, then set about developing a test to meet these requirements.

It would appear that Raven was one of the very few people (another was Louis Guttman) who appreciated the importance of developing tests which yielded something approaching an interval scale (although that term was not the stated objective of either author). Among other things, this meant that the sequence of item difficulties must be the same for persons of all levels of ability. In order to demonstrate this … and identify those items which needed to be modified or rejected … Raven plotted what have since become known in Item Response Theory terminology as Item Characteristic Curves. (When Georg Rasch appeared on the scene in the late 1950s and developed a mathematical model for doing this he tested it on the RPM and was satisfied when it worked!)

The SPM came into its own with the advent of the Second World War. High levels of illiteracy and huge numbers to be tested rendered the use of most other tests unfeasible. The absence of any dependence on language facilitated the diffusion of the tests into military systems throughout the world. (One sees the same requirement for language independence in such places as the mines of South Africa today. Again, there are many prospective entrants speaking many languages – all differing from that of the test administrator.)

Another website, www.eyeonsociety.co.uk, is devoted to exploring ways of taking the work Forward. A complete list of his publications can be found here and for more general information feel free to visit Wikipedia.

For Example (Co)-author of the tests: