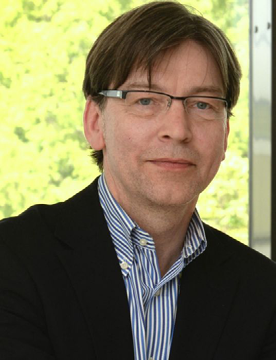 "Theory without practice is empty, and practice without theory is blind" (John Desmond Bernal)

“I want to transfer scientific findings into practice, provide a scientific response to questions that arise from practice and promote dialogue between scientists and practitioners.”

Profile:
Prof. Martin Kersting studied psychology; he was an advisor to the Deutsche Gesellschaft für Personalwesen (German Society for Human Resource Management) and has worked for Kienbaum Consultants. He worked at RWTH Aachen University for eight years. He is a member of the Arbeitskreis Assessment Center and the DIN Commission (DIN 33430 on personnel selection) and chairman of the Assessment and Testing Board (Diagnostik- und Testkuratorium). From 2008 to 2011 he was head of the Management and Supervision Department at the Federal Revenue Administration's Centre for Education and Science. Since 2011 Martin Kersting has been Professor of Psychological Assessment at Justus Liebig University in Giessen. He has authored or co-authored various tests of cognitive competence and soft skills and more than 100 publications, and he has given more than 200 lectures on aspects of business and personnel psychology. Martin Kersting is one of the “leading thinkers in human resources” (Personalmagazin, 2015) and has been named a “professor of the year” (national competition, Unicum 2015).

What was the greatest challenge in developing your tests?
The greatest challenge was making the items in the test as realistic as possible while maintaining the high standards required of psychometric measurement. For example, participants are allowed to use a calculator – but nevertheless the items have the necessary difficulty.

For what target group were the tests developed?
There is a particular need for the test in recruitment, especially when the applicants include “seasoned” personnel who might not accept a classical suitability test. But the test can also be used with anyone aged 16 or more when a well-accepted test of general cognitive competence is required.

What are the special features of the tests?
SMART relates to a specific (fictive) company. All tasks are associated with a higher-level "story" called an overarching scenario. As in a case study, the tasks arise from various events within “inversagi”, a mail-order electronics company. There are realistic tables, diagrams and newspaper articles. Participants have access to a calculator, there is an email program for them to use in planning tasks, and so on.

How to you see tests developing in the future? What aspects of this are you particularly interested in?
I am excited by the idea of “individualizing” the test even more. For example, the overarching scenario could be adapted to the specific company that is using SMART for recruitment. The participant’s role could match his CV (e.g. intern vs. CEO).

There is further information on the author’s website: http://kersting-internet.de